Todd Jonathan Rogers (born September 30, 1973) is an American professional beach volleyball player who is an Olympic and FIVB Beach Volleyball World Championship gold medalist. He and his former partner, Phil Dalhausser, were the 2007, 2008, 2009, 2010, and 2011 AVP Tour champions.

Rogers was born in Santa Barbara, California to David and Heidi Rogers.

After high school, Rogers enrolled at the University of California, Santa Barbara. He played for the men's volleyball team from 1993 through 1996 and was twice named a Second Team All-American by the American Volleyball Coaches Association in 1995 and 1996. Rogers set a school record for career digs with 783 (since surpassed) and placed second in career assists with 4,831. He earned a degree in religious studies with a minor in coaching.

After my first season on the freshman team, he told all of the guys to go down to the beach and play beach volleyball if they wanted to get better at indoors. He also threw in the caveat that there were a lot of pretty girls in bikinis down at the beach. Needless to say it got us down there and we all became hooked on the sport of beach volleyball.

"After my first season on the freshman team, he told all of the guys to go down to the beach and play beach volleyball if they wanted to get better at indoors. He also threw in the caveat that there were a lot of pretty girls in bikinis down at the beach. Needless to say it got us down there and we all became hooked on the sport of beach volleyball."

—Rogers on why his high school coach, Jon Lee, urged him to start beach volleyball.

He later competed with Dax Holdren and the two entered into professional tournaments starting in 1993. Rogers, however, could not collect any prize money in order to keep his amateur status with the National Collegiate Athletic Association as he was also competing with the UC Santa Barbara Gauchos while a student-athlete. The duo competed in the Manhattan Beach Open in August 1995, finishing 25th.

After graduating from UC Santa Barbara, Rogers turned professional and kept Dax Holdren as his partner. The duo competed in the domestic AVP Tour and the international FIVB Beach Volleyball World Tour. Rogers took AVP Rookie of the Year honors in 1997. It took until the AVP Minneapolis Open in July 1998 for the pair to win their first tournament together while their first FIVB Beach Volleyball World Tour tournament win came in June 2000 at the Mexico Open in Rosarito, Mexico.

Rogers and Holdren spent 6 years as a professional tandem and achieved 5 first-place finishes on the AVP Tour and 1 first-place finish apiece on the FIVB Beach World Tour and the Beach Volleyball America Tour. He played every match during this span with Holdren, with exceptions being Kevin Martin for the 1997 AVP Tour Dallas Open, Canyon Ceman for the 1999 AVP Tour Cleveland Tournament of Champions, Stein Metzger for the 2000 FIVB Brazil Open, and various teammates for the 1998–2001 AVP Tour King of the Beach tournaments held in Las Vegas, before switching to Sean Scott permanently at the end of 2001.

Rogers split with Holdren at the end of 2001 and partnered up with Sean Scott for the Rogers' last event of the 2001 FIVB Beach Volleyball World Tour, the Brazil Open. The duo narrowly missed out on participation in the 2004 Summer Olympics as the third-best American teams while only two are sent. The pair found moderate success, winning on four separate AVP Tour stops. As with his previous partnership with Dax Holdren, Rogers played the overwhelming majority throughout this period with Scott, with the few exceptions being the start of the 2003 AVP Tour with Eli Fairfield for 2 tournaments, the 2005 AVP Austin Open with Reid Priddy, various teammates for the 2004 Best of the Beach and 2005 Las Vegas Shootout, and Phil Dalhausser for the 2005 Beach Volleyball World Championships prior to making a permanent switch to Dalhausser in 2006.

While playing with Scott, Rogers took notice of a 6'9" up-and-comer named Phil Dalhausser. Recognizing his potential, Rogers partnered with him for the 2006 season and began coaching Dalhausser on the intricacies of the game.

The pair won eight AVP events and one FIVB event in 2006. Rogers also won the season-ending round-robin tournament, earning the title, "God of the Beach".

Rogers and Dalhausser finished the 2007 AVP season as the dominant winners, finishing with more than 800 points over the second place team with 10 tournament wins.

Rogers and Dalhausser have been a dominant force on both the 2008 AVP and FIVB tours. They have eight domestic wins, and three international wins, all in Grand Slam events.

In 2011 Rogers and Dalhauser set new single season records for the most wins in a season on the FIVB, finishing the year as the worlds number one ranked team. 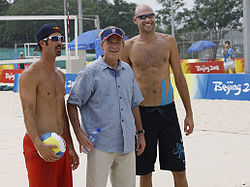 President George W. Bush poses with Rogers and teammate Phil Dalhausser as he visited the practice session Saturday, August 9, 2008, at Beijing's Chaoyang Park prior to their first matches of the 2008 Summer Olympic Games.

Despite being ranked as the #4 team in the world, Rogers and partner, Sean Scott, were beaten out for the top two available slots for U.S. teams. Rogers was named an alternate but did not play. Rogers and Dalhausser qualified as the number one team for the 2008 Olympics.  After suffering a first round surprise defeat to Latvia, Rogers and Dalhausser won the gold medal in beach volleyball at the 2008 Summer Olympics on August 22, 2008 by defeating the Brazilian team of Fabio/Marcio in three sets.

Rogers and Dalhausser failed to defend their gold medal at the London 2012 Olympic Games. The pair was ousted in the round of 16 by the young Italian team of Paolo Nicolai and Daniele Lupo, losing in straight sets for the first time in their Olympic careers.

Rogers was the assistant men's volleyball coach at UC Santa Barbara from 2000 to 2005. He left coaching to devote full-time attention to his professional career. Rogers and his partner Dalhausser won the 2008 Beijing Olympics gold medal in men's beach volleyball, topping off a year that saw them win nearly every tournament they entered. Early in 2016, Rogers was hired as head coach of the Cal Poly women's beach volleyball team.

Rogers has been inducted into the Santa Barbara Athletic round table hall of fame for his achievements in the sport of indoor and beach volleyball. He is a surfer in his spare time.